This is a placeholder topic for “PiicoDev Precision Temperature Sensor TMP117” comments. The PiicoDev Precision Temperature Sensor features a low-power, high precision TMP117 with 16-bit resolution and an accuracy of ±0.1°C (across -20°C to +50°C) with no calibration required.

Wow! This is a seriously accurate sensor! I’m tossing up whether to use one of these or a MAX31888 in a design, but I was wondering if anyone has gotten a few of these sensors and tested the variance between them? I had to calibrate some DS18B20s a while back, and they were far enough apart to warrant calibration (though some may be fakes).

Here’s a graph of my DS18B20s for reference (a fairly simple polynomial was all it took to bring these into line IIRC, but most of the sensors have failed so I’m looking for replacements):

Does anyone here have a few of these they’d be willing to throw together for a quick test? Obviously you won’t need to go deep like I did with a sous vide machine and a pot, just a few data points in still air.

Which datapoints, in particular, were you after, or what was it that you want to be tested? Core Electronics designed and manufacture there breakouts in-house here in Newcastle, I’m sure that the team would be keen to do some testing on it for you to add some more specs for it if we’ve got the setup and time for it.

I’d be mostly just interested in how close the readings of a few TMP117s are to each other while close to each other over time, and how much they drift. i.e. If you were taking a measurement of 3 sensors every second or so, for a few minutes, how close would they stay to each other?

What I might end up doing if my project goes forward is make a bit of a “temperature sensor showdown” where I make up some PCB breakouts of the TMP117, DS18B20 (genuine), and MAX31888, and see how accurate they are, and how much calibration is needed.

The project involves making a thermal model of my house and using that for more efficient control of HVAC, but I still have a ton of work to do before it’s worth showing off.

Interesting, I like the idea of the showdown, of course as you’ve noted you’ll want to make sure that the DS18B20 are genuine maxim chips. I’ve personally tested our range about a year ago to remove the duds, but it’s pretty easy to run the test to confirm (linked below for anyone curious) 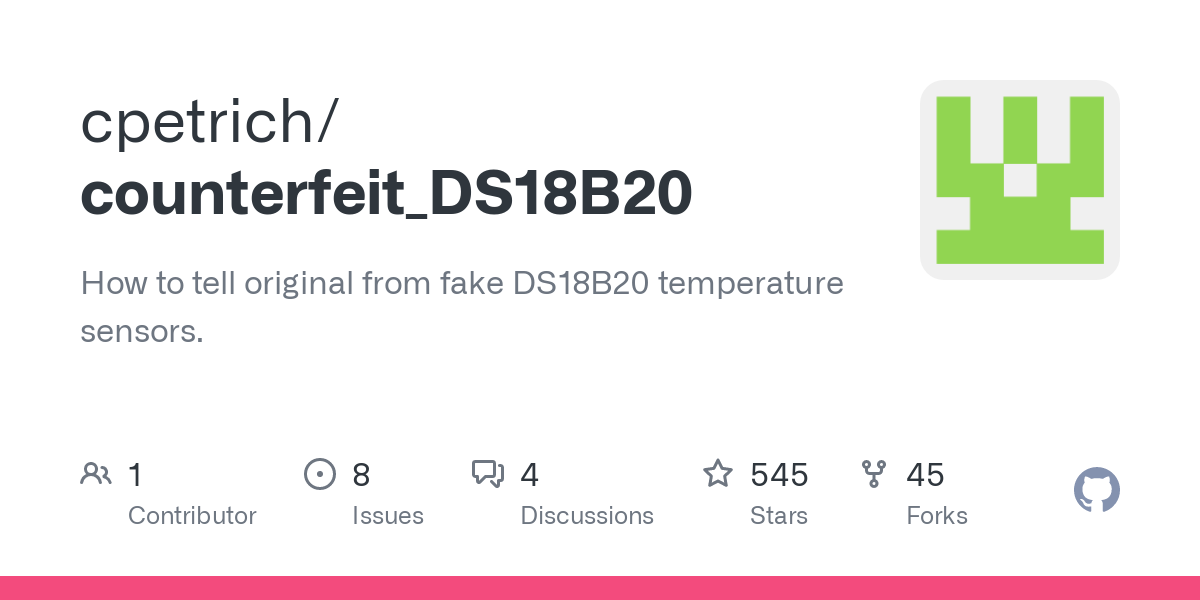 GitHub - cpetrich/counterfeit_DS18B20: How to tell original from fake DS18B20...

I’ll let @Michael know for you to see whether that’s something we can quickly rig up here with sensors from a few manufacturing batches and leave it running for a while logging the variation.

Seems this may have been a bit of a farce! Since there isn’t anything readily available that can act as a reference for the sensors, there’s no point measuring the TMP117. Perhaps @Michael has already rolled his eyes at this thread already.

Variance between TMP117s would be interesting to see, but accuracy would be impossible to measure. I think I’ll use the TMP117 as my reference for all the other inferior sensors

Seems this may have been a bit of a farce!

Couldn’t agree more.
Some time ago there was a video floating about linked on this forum.
It described how the scientific community is still trying how to get a national standard 0ºC reference. Similar to the standard 1 metre etc. They have apparently not worked it out yet so what chance have us mere mortals got. I take all this .1º accuracy etc with a quite large grain of salt. Outside of a laboratory what sort of thing requires this. I reckon if you had 10 thermometers alongside one another you would get 10 different temperatures. This is regarded as the norm as in reality in the real world a degree or so probably does not matter much.

The medical world would benefit as recently people have been made much more aware of the importance of body temperature and a couple of degrees apparently means the difference between normal and fever. But still not 0.1ºC.

Thermocouples are something else. I think from memory the common K type as used everywhere is something like +/- 2 or 2.5 degC. I would have to check the exact figure but it is quite broad.
Cheers Bob

Here’s a great video I watched on temperature a while ago: 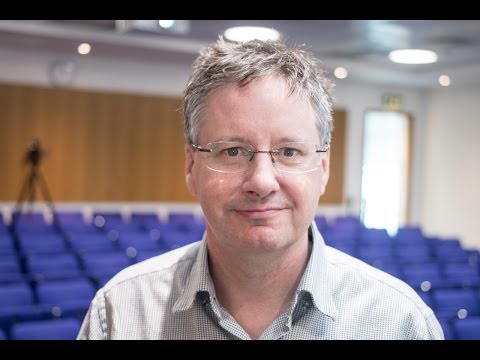 Hi Oliver
I think this is the video I saw.
It is well worth a look by all interested parties. You would never believe the fridge thermometer again.
I think I will stick to my K type in the old DMM or some other less exotic thing. After all if I feel cold it must BE cold and If I feel hot it must BE hot. In most personal feeling cases the actual temperature is irrelevant. Isn’t it ???
Cheers Bob

As @James84823 pointed out - we’ll take what TI spec the part at and run with it. The most accessible, homebrew reference-temperature I can think of that can handle multiple devices is to submerge them in icy, dionised water…

Consider how difficult it might be to create a constant temperature across all the devices-under-test. At these kinds of numbers even the thermal noise in the part needs to be taken into consideration - that’s the self-heating caused by powering the thing up, and running its peripherals (I2C).

According to TI’s datasheet the TMP117 is intended for use in medical equipment as a replacement for platinum RTDs. This part is no joke!

To be clear - the PiicoDev Precision Temperature Sensor is not suitable for use in medical equipment or where failure could cause injury, loss of life or property.

Measuring temperature and comfort are a whole other ball game, ergonomics is very interesting subject (not just how your chair feels).

There are so many factors to how you feel, I’ve seen it mentioned many times around on the forum, Wet Bulb Globe Temperature is the metric thats commonly used by the BOM. And even still this is only a model of how we feel.
Combined with the rest of the PiicoDev range you could almost get all of the variables I reckon

Conceptions about how hot or cold something feels are always tricky, reminds me of this classic from Veritasium. 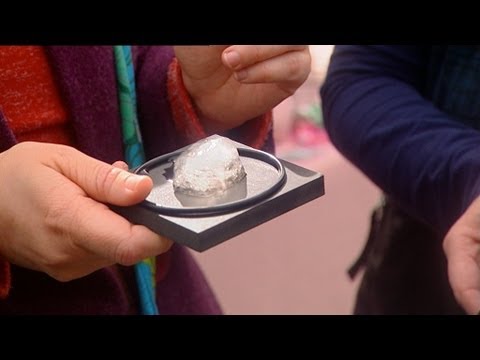 This is my first post so forgive any errors - I hope that this is the right place to ask but if not please tell me. In setting up this post I find that:

Could you suggest how to do this?

I have recorded and measured temperature using

I have programed this to output the values to a file and tested this by measuring the temperature of my freezer and the result was fantastic.
Unfortunately I left the battery / piico development board connected for a week and flattened the battery.

I now want to measure (in the freezer the freezing point of a salt solution.

Any hints comments would be helpful

Welcome to the forums

Re the posting difficultes, here’s a post I’ve made previously about how to paste your code in:

And you can upload/insert images by clicking on the

We’ve got some good articles on powering a project from a battery: Want to make your project portable? We've put together a quick guide to get you up to speed on battery options and help you decide which batteries might be best for your project. Batteries are a whole different game to plug packs and benchtop power...

Cold is very hard on batteries, and they often won’t be designed to work down at sub-zero temperatures as it will freeze the electrolyte. I’d recommend keeping your batteries outside the freezer and running a wire in to power your device. It shouldn’t affect the seal on your freezer much. Yes, monitoring the battery voltage is the usually way. A fully charged LiPo will be around 4.2v, and dead flat below 3.0v. Here’s an article I found with a quick google that gives some good advice on understanding the discharge profile of a typical LiPo battery: 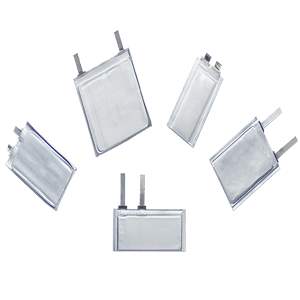 A Complete guide to lithium polymer (lipo) batteries including everything you should know - from History, Battery Structure, Pros and Cons,Charging method, Storage and so on.

Will putting the TMP117 in a plastic bag in the solution cause any problems? Obviously if the TMP117 is put in a solution will short the sensor but if the ice contracts on freezing will it harm the sensor?.

Hard to say. If there’s enough air and the bag is sealed, and the ice has somewhere else to expand it might be ok. If the sensor gets frozen into the ice it might get crushed. You also run the risk of condensation and ice forming on the PCB, which may also result in damage - it’s not the best choice of temperature sensor for what you’re doing.

Hi Trent.
Interesting. Like a fan. the air temperature has got to be the same behind and in front of it but the front feels cooler due to the air movement evaporating moisture off your skin.

Personal experience demonstrating how it is all relative.
I had been residing in PNG for some 3 years at this time. Friday night at Lae Golf Club at the movies. Auditorium was termed a Haus Wind, that is closed at each end but open to fresh air at the sides. We were experiencing a bit of a weather event. Heavy rain which was not unusual but pretty high wind which was extremely unusual.
I was in the bar in shirt and shorts having an ale (or two) and my wife and 3 children out in the hall. They were huddled together trying to keep warm under a blanket and I was freezing in the bar with goose bumps on arms and legs, felt really cold.
THE THERMOMETER SAID 29ºC. Like I said, how you feel is all relative. Normal would be about 38ºC 24/7.
Cheers Bob

Guys,
fascinating to see the comments above regarding temperature measurement.

My use case is the ongoing measurement of temperature in a few different locations inside and outside of the house. The TMP117 accuracy and precision is more than adequate for this. Allegedly.

I’m also interested in considerations such as cost, ease of use, consistency, repeatability, and interchangeability.

A quartet of piicodev TMP117s and a raspberry pi would not be definitive. But I’m curious to know just how close the readings are “out of the box” and how well they track over a period of time. Plus any insights gained in the process.

Hi Allan
See the other post re my thoughts on all of this.