This is a placeholder topic for “Buzzer 5V - Breadboard friendly” comments. Hey want to hear a really loud noise? Apply 3V to 5V to this buzzer module and you’ll be rewarded with a loud 2KHz BEEEEEEEEEEEEEEEEEP. Unlike a plain piezo, this … read more

Hi. I’m wondering if there’s a way to control the volume? throwing it on a potentiometer mostly just turns it off instead of adjusting volume. Thanks!

Mind you a quick google, and it looks like someone’s had some luck with high-ish frequency PWM: 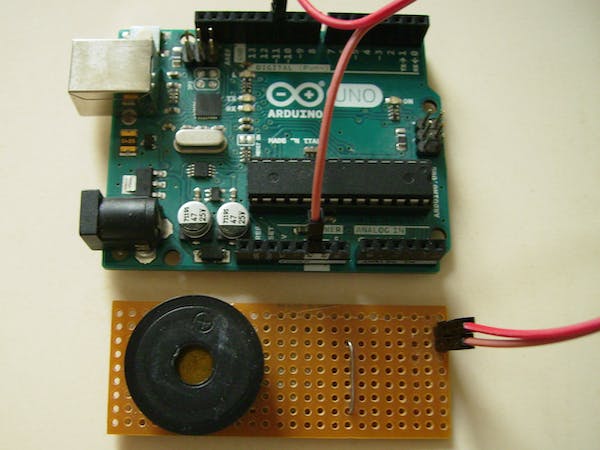 A novel variant of the Arduino Fade sketch By Mr_Glenn.

The ohter thing to note is that a Piezo buzzer probably draws bugger all current and is itself very high impedance. If your potentiometer is either too low or too high of a range, you might not get any practical control out of it, as it’ll be not sensitive enough, or way too sensitive.

Thanks for the information. I think I’ll look for a smaller potentiometer, as being very precise with my current one does set it to an acceptable level.

might also try getting back into arduino, haven’t used one for a good few years by now!

You may also be interested in using two potentiometers for fine and course control of the overall resistance, it may be a little difficult to setup correctly, but the results should be quite useful and it should be fun to learn!

Circuit for a coarse and fine setting potentiometer?

Hi,
What is the current consumption of the buzzer at 3V3 and 5.0V?
Is it a piezo buzzer and does it need any snubber components.
I am coming across people wanting to drive it directly from a digital output, in particular a Nano33BLE that has only 15mA output capability.
Thanks

Unfortunately the integrated driver is a bit of a black box so we don’t have any specs for it. I would expect the current draw to be quite low, but some experimentation may be needed to find the current draw. I’ll update this thread if I can get some tests done later.

EDIT: I’ve tested the buzzer with our benchtop power supply and a multimeter. It drew 16mA at 3.3 Volts and drew 24mA at 5 Volts.
Oddly the pitch did seem slightly different at 5 Volts, so take the 2 kHz output with a grain of salt.