First time posting regarding a nice product purchased from CE. This wireless charging module, composed of transmitting and receiving ends, can transfer energy through medias such as air, paper, or plastic. Based on “magnetic-coupled .. read more

As the contributors here seem to be really helpful with advice, I figured this would be a good place to start regarding what I hope is a relatively simple project.

My rather creatively minded 11 year old son wants to work on a school project, but hasn’t been able to find suitable answers to his main questions anywhere, so as it was me who found the wireless charging module, I’m trying to help him with his main obstacle.

He has designed a board game that requires several small moveable 3D printed pieces including various characters, aliens, spacecraft, base stations etc which all need to have the ability to light up by themselves, but as these pieces are quite small and need to be automated, batteries, wires and switches are out of the question.

They will however include very small LED’s that are powered by the charging module. I managed to find exactly what he was looking for after some research. The most suitable LED’s complete with coil are still available from Japan (albeit now extremely expensive) which seem to be left over from a failed Kickstarter project from 2014. (Links to images below) 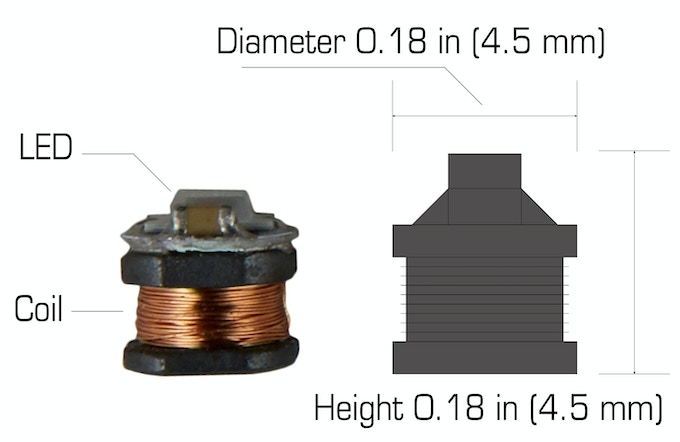 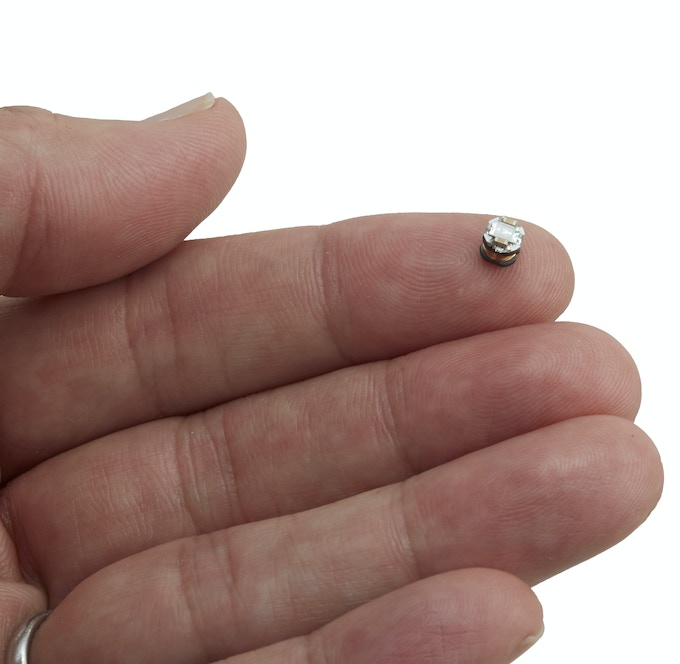 I’ve now tried these LEDs with the DFRobot charging module and they do indeed light up nicely when placed over the transmitter coil, but here is the main hurdle.

Each moveable piece needs to light up automatically or not, depending where it is placed on the playing area of the board game. If it is placed on one section, it lights up. When placed elsewhere it does not.

The playing area is quite large… around 50 x 50 cms

Obviously one single coil isn’t suitable, as the board would require several coils, perhaps up to 12. So the questions are these…

How would he need to go about positioning and powering multiple transmitter modules built into the same surface?

Would each coil require its own board/module, or can a single transmitter module be used and connected to several coils?

Can the coils be made larger or smaller?

Many thanks for your answers and suggestions.

This quite an interesting project with some unique challenges. I don’t know if the coil idea is the best way to do it. I would need to answer some questions before I could be sure it could be done.

Each moveable piece needs to light up automatically or not, depending where it is placed on the playing area of the board game. If it is placed on one section, it lights up. When placed elsewhere it does not.

So you have two issues here.
Need a way to recognise different LED pieces. (I assume each piece is LED and coil only and all the same)
Need a way to activated the coil when the right piece is placed on it.

Would each coil require its own board/module, or can a single transmitter module be used and connected to several coils?

Each square would need a way of switching the coil on and off.

Can the coils be made larger or smaller?

Yes, very small coils have been made and very large ones.
Experimentation would be required to determine the size of wire needed, current requirements, and layout of coil. Spiral as per the link or on some type of rod. Essentially you want to generate a strong electric field for the size, which can be picked up by the LED coil.

My first step would be to see if I could make a coil similar to the link that would light up the LED. Then experiment with size and shape of the coil, flat is obviously the best. And the amount of current and voltage needed.
Second would be a switching circuit for the above.
How to identify individual pieces, at this time I am unsure how I would do that.

EDIT: There is one important thing I forgot. The frequency applied to the coil would need to be determined to produce the best electric field. This could be DC to several megahertz. Some experimentation and investigation would be needed. My theory on electric fields is a little rusty.

s could be DC to several megahertz.

Agree.
DC in the case of a Solenoid where a Magnetic field moves a metal rod.
For Ricks project it will need to be AC as you want to transfer Electrical energy. Getting that right could be tricky. The edit was a last minute addition.
Cheers
Jim

Many thanks and appreciation for the suggestions and responses.

While everything you’ve both suggested and raised is of course very valid, in this case however this is really just a very simple and experimental project for a curious 11 year old rather than anything too elaborate or of any kind of professional design or standard. I guess the easiest way to express it would be to say that this is mostly to demonstrate ‘proof of concept’, which is how I believe the project is being assessed, with an opportunity to improve and problem solve at a later stage of the project development.

The coil switching issue you’ve both commented on is obviously a crucial challenge, and in the ‘real world’ would require a more direct solution, but after experimenting with the TX module / coil and LED that was have as described above, the LED lights up nicely when positioned close to the centre of the coil, but when moved only several centimetres away, it doesn’t, which as a single module and LED configuration is pretty close to what this project needs to demonstrate at this early stage and is perhaps as functional as it needs to be initially, only it needs to be duplicated with multiple coils. The only real question therefore for now is whether this can be done by connecting several coils to the same module / TX board as per my first posting, or would each coil require its own individual power module?

So the hope is that by randomly positioning several coils under the playing area of the board, the distances between each will be enough to power each LED/piece when placed close enough, and not powered when placed out of range a few centimetres away, without having to resort to any kind of switching or activating individual coils straight off.

In regards to adding to connecting several coils to the same chip: It depends what is happening on that chip, if its an active controller you should be able to add coils, if its a simple timer the manufacturer would have already tuned the circuit to oscillate at some set stable frequency.
Imo your best bet would be grabbing multiple modules so you can control each section of the board.
I came across two search results that got some good products:

You’ll be able to power multiple LED’s with the one coil, the number depends on how much power it can output (also make sure your coil outputs the correct voltage, if you go too high it can destroy or shorten the lifetime of the LED’s)

Ultimately to track and turn coils on and off you will need a kind of switch, this could be simple, such as using physical buttons and the weight of each piece to turn the coils on and off or a microcontroller and a tracking system( NFC or RFID might not work due to the RF coming from the coils) A camera system might work, though a big step up in complexity: https://core-electronics.com.au/tutorials/QR-codes-raspberry-pi.html

Thanks for the detail in your post, makes it easier to understand and provide valid answers. Think I understand what you want to achieve better now.
The Wireless charging Module is designed to transfer electrical energy efficiently and at a high level (3A compared to LED requirement of 20mA).

When you say connect several coils to the same module, I assume you would make a similar coil and connect them in parallel. This would radically upset the balance of the module driver and may overload it. I would need to see the circuit of the module to assess the impact and that could be hard to obtain. If you could provide a close up pic of the module driver chip I might be able to figure out what it does.

Of course you could make a coil and attach it and see what happens. Probably it will be ok for a while, but then maybe not. The coils could be connected in series, this maybe better, but it still would impact the driver chip. The circuit could be redesigned to use multiple coils, but that would mean a new module. The datasheet for one chip I looked up shows it is quite smart, detecting what has been placed near it and adjusting its output. So multiple coils maybe ok.

If you can afford it, a number of modules might be the easiest way to go for now.

Anyway, radically changing the manufacturers design is something I would NOT attempt unless the theory made sense to start with.

Looked up this device and there is a link to the schematic.

L1 and C3,C4,C5 & C6 form a resonant ‘tank’ circuit. The receiver module coil and capacitors would be tuned to this resonant frequency to achieve maximum efficiency. Adding another coil would change the resonant frequency. But in your case this may not matter, it depends on the LED coil.

As you said placing the LED in the centre of the coil it lights up, moving it a few centimetres away it turns off. This indicates to me the magnetic coupling between the LED coil and the transmitting module coil is not optimal. Adding another coil may improve or deteriorate the amount of coupling. Adding a capacitor may also improve or deteriorate the conditions. Some experimentation may be needed, unless you have access to an electrical engineer who can do the calculations for you and come up with the best values to use.

I am assuming the device you have works similar to the one I have linked.

Anyway, should be fun.
Cheers
Jim