I’ve only had a cursory read of this thread, but is there any reason why you couldn’t just lower the Z endstop physically such that the bed is always positive? Or is the problem worse than that?

I’ve only compiled Marlin from source once for my Ender 3 V2 (I’m a Klipper man now), but I became aware of the “software endstops” present in Marlin that can be enabled/disabled with M211 S1 or S0. One advantage of Klipper is that you can make firmware changes on the fly, restart the printer and see the changes immediately rather than having to recompile and flash it every time.

Teaching Tech has a good video on converting a CR-10, should give you an idea of the process involved 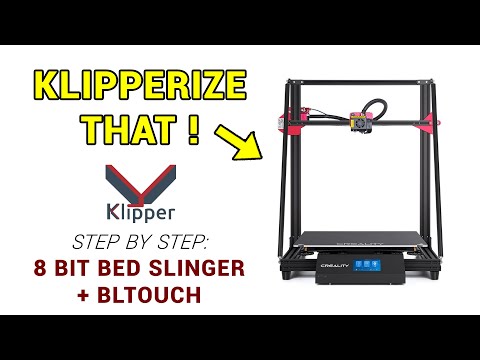 Let me know if you have any questions about Klipper, I can talk for days about it!
-James

Hi James
Thanks. Lower the bed physically doesn’t seem possible on the CR-20 Pro as is attached directly (don’t see any movable parts). I’ll check whether it has something to do with M211.
I watched the video regarding Klipper but have to admit the change looks and sounds quite daunting since it requires Alda a raspberry pi (I currently use Creality WiFi for my connection).
So I’d flush my old working firmware again rather than creating an even bigger mess.

Hi John
I got the 2.0.9.1 version from the official Marlin GitHub site as well as the specific CR-20 Pro example file.

Just to clarify, I meant moving the endstop rather than the bed, so that the printer thanks z=0 is actually z=1 or something like that.

Hope you get to the bottom of this!
-James

I‘m a beginner with 3D printing.

It started well, and from time to time I was going to check the status of the print, took 3 1/2 hours.
During one check I saw that one corner came up a little bit from the ground.
As I‘ve checked it the next time the piece have been moved away and it was printing into nothing.
I can imagine that this happened because one corner left the ground and so the extruder moved the piece away

You can also see on the picture that the ground of the piece makes a curve, should be flat.
Is the heating ground to hot or what could be the problem?

Getting the first layer to adhere properly is perhaps the trickiest part of 3D printing. It must be good enough to prevent curling and ensure the piece remains attached during the whole print, but not so good that you ca’t remove the piece when finished. What slicer are you using, and what material? There will be many settings available in the slicer that you can adjust to suit the material and print bed, and there are changes you can make to the print bed. Temperature is an important adjustment, but also thickness of that first layer and speed at which the first few layers are printed, as well as adjustments such as skirt and raft. The problems and soutions are well documented on the 'net, so you can search by something like “3D printing Adhesion”. For instance:
3D Printer Bed Adhesion: All You Need to Know | All3DP
Not Sticking to the Bed (simplify3d.com)
pla - Prints falling off the bed towards the end of the print - 3D Printing Stack Exchange

Jeff’s sent through some excellent guides, its definitely worth checking them out!

Another key point to check is that the bed is ‘levelled’ or trammed (aligning the moving axes of the printer to the build plate).
Since the CR-20 pro has an included BL touch you’ll have to configure the levelling system, here’s a guide worth taking a look at: CR 20 Pro Bed leveling tutorial(BLtouch) - YouTube

The Z offset is required to take into account the difference in height of the blue touch probe and the extruder nozzle stickers printing. When you change the nozzle you have to remove and later replace the probe and hence need to reset the Z offset.

The instructions for 2.0.5 tell you to store the settings after setting the Z axis. Before you print via the USB (eg using Octoprint) make sure that you level the bed and save the settings.

With 1.1.6 I had hassles setting the Z offset but was lucky to have good printing for a week. Then print aborts became regular and after trying to do a Z offset things went really bad and my magnetic bed was trenched.

Your information is really useful