Another day another game to generate notes! This time it’s Tetris. Similar too before there is a main sequence that is played by the Volca Bass. The game alters the sequence notes based on the position of the Tetris pieces. You can see the altered notes as they flash white on the Launchpad display. The Volca FM plays only the altered notes. Interestingly, it helps the music to be not so good at Tetris… The Volca Drum plays its own pattern. 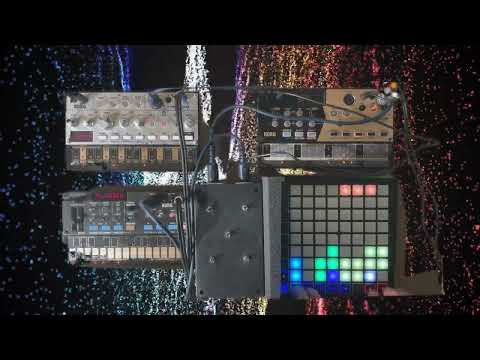 A brilliant, nice add-on to the project! Also, is that a visualizer application that you’ve got running in the background of the video? Or is it just a generic pattern?

Thanks Bryce. It’s a video loop with green screen, or should I say green cardboard!

I wasn’t sure if Tetris would be a bridge too far but then you’ve actually gone and done it!

It’s a good thing you get more interesting sounds by being not-so-good at Tetris because I’d be totally rubbish.

It was an interesting idea and a bit of a challenge. The rotation of pieces was the most challenging but I managed to make it work. Some of the code is a bit bodged…

I like green screen, but I need better directed lighting to get rid of some shadows.

Jamuary is a thing, not a spelling mistake…

Yes, I noticed that earlier and was going to fix it up, but then realised the play on words Jam-uary

Someone fixed it so I put it back.
All good…

Jamuary was invented by a guy called “Cookoo” on you tube. Says it all really. He seems to be a nice cool dude.

Ahhh, whoops! My bad, I thought it was a typo so ‘fixed’ it up for you

Thanks for fixing it. Your intentions where admirable!