I have updated the Conway’s “Game of Life” note generator to send two different self generated patterns, one to each of the MIDI DIN outs so the Volca Bass and FM have different patterns. One is based on a cell dying (red), the other on a cell being born (blue). MIDI clock is also sent out each DIN socket, enabling the FM to sync with the Drum. A couple of times the game got stuck in a loop and I re-seeded new cells to break the loop. 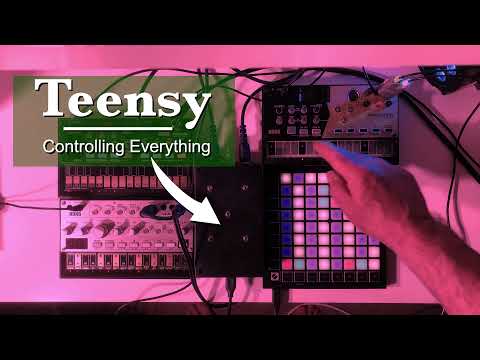 Brilliant project, with larger arrays it’s really quite incredible what’s possible with the simple rules from Conway’s GoL, I’ve seen clips where people have tirelessly designed calculators or clocks and such based on starting positions of gliders.

Really enjoyed the visual effects on this one! Nice work getting it running on a Teensy.

For anyone unsure about The Game of Life, here’s a wiki article you may find helpful

The Game of Life, also known simply as Life, is a cellular automaton devised by the British mathematician John Horton Conway in 1970. It is a zero-player game, meaning that its evolution is determined by its initial state, requiring no further input. One interacts with the Game of Life by creating an initial configuration and observing how it evolves. It is Turing complete and can simulate a universal constructor or any other Turing machine. The universe of the Game of Life is an infinite, two...

Thanks Bryce. It was a bit of mucking around writing code to send to the Launchpad, but now that is done it provide a nice interactive canvas for music and other things as well.

This time the music is generated entirely by the “Game of Life”. There are three types of cells and 3 synths to play a note depending on where the cell is. It has a certain musicality to it but often gets stuck and needs a re-seed. 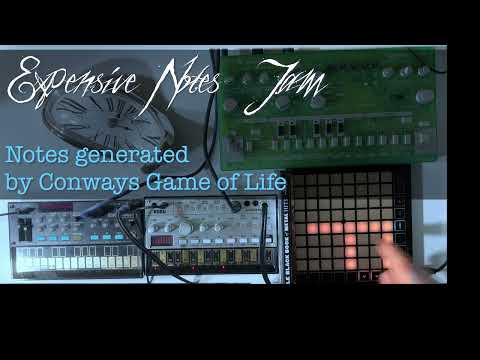