tl dr: What would I use to replace a broken LED on a circuit board?

I’ve gotten a micro-USB to ethernet adapter not unlike this one for my Raspberry Pi Zero, which I intend to use as a permanent installation for a smart clock display. Yes, I do regret not getting a W model at this point.

The internal LEDs on the adapter are too bright for its intended use. I (wrongly) assumed they were connected in parallel to the rest of the circuitry and destructively desoldered the LEDs from the board (they are modules like the LED on this); the adapter is completely non-functional now. I was wondering what an appropriate and safe replacement for the LEDs would be. Considering that they are so low powered in the first place and already have a resister connected to them on the board I was tempted just to bridge the connection with solder but I’d rather be on the safe side as this will be a permanently on device that will be unsupervised for extended periods of time.

I have a few spare resister modules on hand (a 103 and a 105, like this), but I don’t know what the initial resistance of the LEDs was in the first place.

but I don’t know what the initial resistance of the LEDs was in the first place.

LEDs don’t have an internal resistance as such. They have a forward voltage drop which remains largely unchanged over a wide current range. This will obviously change when operating conditions get to extremes but under “normal” operating conditions within the published current ranges this voltage drop remains reasonably constant. This voltage drop is different for different colours of the same types. That is why when a table of resistor values is published for the same current the values differ depending on LED colour.
Cheers Bob
PS: A new adaptor may be the most economical way out in the long run.

Interesting. Clearly I don’t know enough about LEDs to be experimenting around with them like this.

Ironcially enough, the cheapest micro-usb to ethernet adaptor I can find is around $25, whethers a Pi Zero W from this very store is only $17.95. Buying a brand new Pi would be the most cut-throat economical solution. Honestly I might just do as that would also solve the LED issue in the first place unless there’s some even more economical way to connect a Pi Zero to the netwok.

Hi Ryan
A LED is a diode (Light Emitting Diode), behaves much like any other diode.
“Normal” diode forward voltage drop about 0.6V to 0.7V, schottky diodes much lower (0.2 to 0.3V)
“Normal” LEDs about 2V to 3+V depending on colour. High power LEDs may be higher.
LEDs have a relatively low reverse voltage capability. in the order of 5V or so. If a greater voltage is used for any reason with a corresponding larger current limiting resistor and there is any chance of this voltage being applied in reverse to the LED another “normal” diode in series with the LED is good practice.
Cheers Bob

I’ve found a more economical way to connect the Pi to the internet.

Apparently Windows has a nifty feature which lets you share your internet connection with devices connected via USB, so all I’d need is another micro-to-type-A USB cable. But I don’t exactly want my triple X rated ultra LED military grade gamer rig on at all times just to provide internet to a Pi Zero, so I’m trying to figure out a way to do this through another Raspberry Pi (found hundreds of tutorials of how to do this on Windows/Mac, but none for generic Linux distros) or even better through my OpenWRT powered router.

Since this is kind of deviating from the original topic of this thead I’ll just make another post if I have trouble with that. Anyway thanks for your help with the specifics of LEDs (never thought of them as functionally diodes despite their name!), but I probably won’t go down that path until I’m more experienced.

That’s brilliant, where did you find the feature? It’s certainly an alternative method, but as always, necessity is the mother of invention.

Let us know how you go with it or if you’ve got any other questions!

P.S Thanks @Robert93820 for the rundown on LEDs! The datasheets for the specific LED should cover the drop and how luminosity changes with respect to the voltage provided if that’s what you’re after on a particular LED.

Note for LED the curve of brightness against voltage supplied is usually quite steep so depending on the circuit, sometimes it can be easier to whack in a microcontroller or 555 timer and use PWM to be able to get an ‘analog’ output and appear to dim the LED by adjusting the duty-cycle so it appears less bright to your eyes as it is essentially flickering on and off very quickly (totally dependant on the project though, a trimpot just before the LED is usually much easier and cheaper) 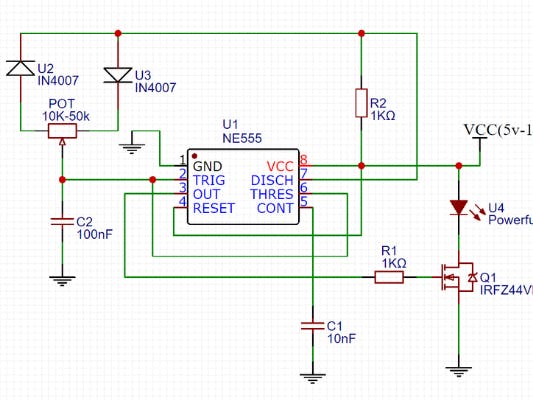 Simple & Easy LED Dimmer Circuit Using 555 IC for LED Strip Lights. I will be able to show you ways to form a dimmer circuit for LED Strips, By Creative creator. These are Adafruit's favorite trimpots, perfect for breadboarding and prototyping. They have a long grippy adjustment knob and with 0.1

Hi Bryce
A trim pot with low enough value may be a bit hard to find. Otherwise you will find yourself right down at one end and be almost impossible to adjust. Easier to use a breadboard and a handful of preferred value resistors.
If brightness needs to be adjusted by a user on a regular basis then PWM is really the way to go.
Cheers Bob

Apparently it’s a feature that is in the USB spec, so basically anything that has USB can also provide an internet connection through it (drivers permitting, of course). The drivers are baked into most operating systems.

I’ve successfully been able to have a different Pi 4 act as the ‘host’ to provide the internet connection to my Pi Zero. I followed the instructions here to set up the Pi Zero as a ‘ethernet gadget’ (add dtoverlay=dwc2 in a new line to config.txt and modules-load=dwc2,g_ether on the existing line to cmdline.txt), connected its data micro-USB port to the Pi 4’s USB port and it all automagically worked. I could even ssh from the ssh on the Pi 4 to the Pi Zero using only the host name.

I also inadvertently discovered that a Pi Zero can be simultaneously powered and be treated as a gadget by a single USB cable connected to its data port. I only need one USB cable for this entire operation, that’s amazing! Though, I will keep an eye on it for under-voltage as USB ports from non-power-brick sources tend to be incredibly low current.

I also managed to get it working through a USB port on my OpenWRT router. For anyone reaching here from the future, I did this by installing the kmod-usb-net-rdns (and kmod-usb3, though I think that was unnecessary) package and then adding the new usb0 physical interface to the LAN zone.

This was quite a journey but learning that you ultimately only need a single USB cable to do basically anything you could with a Pi Zero has opened up its possible implementations to me. Oh and LEDs. I might just buy a breadboard to mess around with them that won’t also involve destroying adaptors.